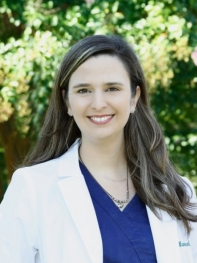 Dr. Montgerard didn’t always know she wanted to be a veterinarian—she had graduated college with a psychology degree before someone sat her down and asked why she hadn’t pursued a career in animal care. Already unsatisfied with the job market, Christy decided to take a leap of faith. She worked as veterinary assistant, took the necessary science courses, and applied to veterinary school. As soon as she got in, she knew she’d made the right choice. Dr. Montgerard had found her calling!

After completing small-animal and zoo internships, Dr. Montgerard returned to the Charlotte area in 2007 to marry her high-school sweetheart, Hank. She settled in at Fullwood Animal Hospital in 2012, when the previous owner was looking for someone to purchase the clinic. After working here for nine months, Christy purchased the hospital in December of 2012.

At the clinic, Dr. Montgerard especially likes connecting with clients and establishing lasting relationships. She never takes for granted the trust that pet parents place in her! Medically, Christy enjoys surgery, dermatology, and internal medicine.

Dr. Montgerard and her husband have four children: 14-year-old Ariel, 13-year-old Spencer, four-year-old Nate, and one-year-old Naomi. A number of pets round out the family. There are four cats: Cho Cho, Oliver, Jack, and Rose, two dogs named Hank and Dolly, and Willie the corn snake.

Although Christy doesn’t have much time for hobbies, she tries to be active in the church and spend time with friends whenever she can. Her family also enjoys hiking, and spend most weekends in the mountains searching for promising new hiking areas.